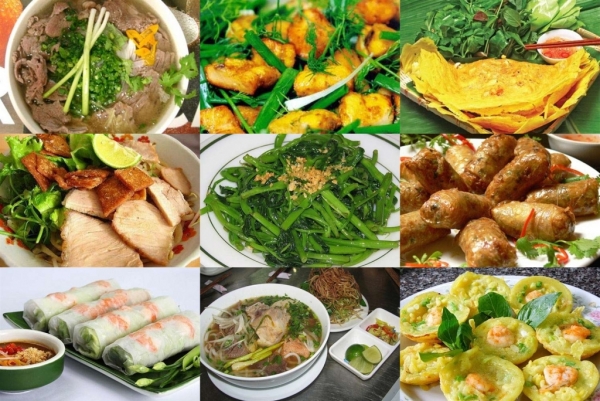 Traditional Vietnamese cooking is greatly admired for its fresh ingredients, minimal use of oil, and selective use of herbs and vegetables. The balance reached between fresh herbs and meats as well as the selective use of spices has earned Vietnamese food the reputation of being one of the healthiest cuisines worldwide.

Due to long periods of occupation by China and France, Vietnamese cuisine now shares many of its characteristics with food from both countries. The Chinese introduced many different noodle dishes, moon cake, fried rice and many pork dishes as well as many others.

They were also responsible for introducing some of the wonderful new spices found in the “New World” such as Chili and Maize (Corn) during the period of the famous Ming dynasty.

The use of Coconut milk and curry in cooking was introduced from Cambodia and curry chicken eaten with rice or bread is a popular dish in central and southern Vietnam.

Over time, the Vietnamese have adapted many of the introduced foods and the cuisine now encompasses the ingredients and beverages of Vietnam, and features a combination of five fundamental taste elements in the overall meal. The ingredients are used to represent, Metal (spicy), Wood (sour), Fire (bitter), Water (salty), and Earth (sweet). Cooks try to include the colours of the five elements into each dish and are represented as; White for metal, Green for wood, Yellow for earth, Red for fire and Black for water.

The principle of yin and yang is applied to the ingredients of each meal and is said to provide a balance for the body. While different textures and flavors are very important to the makeup of the dish, the principal concern applies to the “heating” and “cooling” properties of the ingredients.

Duck is classed as “cool” and is often served with ginger and fish sauce which is “Hot”.

Chicken is classed as “warm” and Pork is classified as “hot” which make them ideal to be served and eaten in winter.

Seafood is considered to range from “cool” to “cold” and is often balanced with ginger as “warm” element.

Salt is used to form a connection between the spirit world and that of the living and is also used at weddings to remind new couples of the perfection and harmony of their union together.

While sharing some fundamental features, traditional Vietnamese cooking differs from region to region.

All regions use fresh ingredients daily which are either eaten uncooked, boiled or lightly stir fried and meats are only cooked briefly to preserve all the nature flavours and juices.

However, due to differences in the climate and personal tastes, food in Vietnam varies in the 3 main regions; North, Central and South.

A cooler climate in the north means there are less spices available and the food tends to be prepared with more black pepper and fish sauce which gives food in the north a subtle and gentle taste.

Due to a large number of herbs and spices being grown in the central highlands area, food in the central region is quite well known for its spicy dishes. Garlic, chili, Vietnamese mint, fish sauce and local black pepper are common ingredients and help set dishes in the centre apart from the other regions. Often a meal in the centre area will consist of many different dishes presented in small servings so you can benefit from the wide range available.

Food in the southern region contains more exotic ingredients such as coconut milk, coriander, basil and is often served with vegetables and fruit. As people in the south prefer sweeter foods, sugar is added to many of the regions specialty dishes but the Yin & Yang balance is always carefully maintained.

Due to economic reasons, it is very important to save money and ways of using all the ingredients have become a tradition in Vietnamese cooking. Even today and especially in the poorer rural areas, every part of an animal is used and nothing is wasted. The more expensive cuts of meat from larger animals (cows & pigs) will be used in stir fries, soup or other dishes, while the cheaper cuts will be used in soup. The same can be said of for vegetables where the leafy part is diced finely and used to add flavour, while the thicker stalks can be grilled with the meat and sometimes the roots are replanted.

Fish Sauce or as it is known, Nước mắm is widely used as a condiment in Vietnamese cooking throughout the country and a small amount will be found to accompany virtually every dish served.

Vietnamese food is not known for containing top quality ingredients but more for the very inexpensive and simple ways all ingredients are blended together to create dishes with unique flavours.

Vietnamese cuisine is influenced by the Asian principle of five elements and Mahābhūta.